Your Favorite Party Board Games – Including Your Childhood Favorites

Home » Your Favorite Party Board Games – Including Your Childhood Favorites

The best part board games for friends or large family gatherings! These entertaining board games will entertain a group with lively fun!

When you combine a sense of humor, a competitive spirit, and love for family, what do you get? A party board game! These games are perfect for large families or groups. They create laughter and memories that will last long after the cake is cut.

The Game of Life!

Players in The Game of Life choose a path and move their car tokens around the gameboard from Start to Retirement. Who is on their way to riches and fortune? Choose a path for a life of adventure, surprises, and dream vacations, but spend your money wisely because the wealthiest player at the end wins the game.

Number of Players:  2  or more

The Cranium Cadoo game encourages kids to think, create, and laugh while they play. Compete in challenges such as sculpting clay objects, solving picture puzzles, acting out clues, drawing a target word, or answering trivia questions. You can either play “combo” or go “solo.”

Playing with a group involves having the other players try to figure out what you’re up to. If another player says it aloud, you’ll both be on the board at the same time. Win if you can get four tokens in a row first. However, you can only win with a single card of your own.

The joy of bankrupting an opponent! But it’s worth playing because fortunes can change by rolling the dice. Experience ups and downs with property colors to create residences and perhaps upgrade to a hotel! The more properties one player has, the higher the rent. There’s a reason why this popular classic board game has stood the test of time and is always a popular one on the list with many themed versions based on current trends like Monopoly Roblox.

Ticket to Ride is an award-winning adventure game for cross-country trains. Players gather train cards to claim rail connections connecting cities across North America. The longer the routes, the higher the points. Further points are provided by those who can meet their tickets by connecting two distant towns and the player who constructs the longest continuous railway.

This rapid and strategic board game has you building your own tracks across the United States. Create train routes between well-known North American cities on a map of the country in the early 20th century in order to rack up points.

Telestrations, the 8-player version was the original spark that ignited this celebrated game. Nearly 2,000 terms are packed into erasable sketchbooks, dry erase markers, and wipe cloths.

Perfect for small gatherings of family, friends, or colleagues; everyone will have a good time with this hilarious game. A fantastic icebreaker and an award-winning party game. Draw what you see, then guess what you see for unusual and amusing outcomes. Stick figures and a sense of humor are both welcome; drawing skills are not required.

It’s the original Scrabble game with luxury features. With this Deluxe Edition game, you can take your Scrabble game to the next level. The gameboard has wheels, so nobody needs to read the board upside down, and the tiles remain in place with their non-slip grip.

Challenge your party guests to a fun and rousing battle of wits and words.

It’s called the “sweet vengeance game,” because players can return one other’s pawns to the beginning position.
There are numerous outcomes based on the cards you choose and the tactics you employ in this game.

Play involves drawing cards and then moving your game pieces about the board in an attempt to place them all in one place, which is called “home sweet home.”

Spies have unfortunately invaded the ranks of the Resistance, ready to undermine the carefully formulated plans. Even one spy can face a resistance squad. Choose your teams carefully, so that you will not lose your opportunity for freedom forever.

The Resistance mixes pure deductive aspects in an elegantly interactive and social event with the social elements in a game that causes adrenaline moments when high stakes are high!

Simply addictive! Big Letters BANANAGRAMS is the speedy and furious word game that comes in larger and easier-to-see tiles.

The bolder contrast text tiles are ideal for users who need extra help with vision or kids. Now you can focus on grabbing the “Top Banana” title!

This is a great game for people of all ages who enjoy playing word games. The word game Bananagrams will have you going bananas!

Choose the card from your hand that is best defined by the judge’s card. You win the round if the judge picks your card. Everyone has an opportunity to be the judge!

Each round is filled with intriguing and ridiculous parallels from various places, events, and people. Apples to Apples is fast-moving and refreshing, excellent for everyone, family, and friends! The Party Box comes with over 1,000 cards.

Party board games are an excellent way to socialize with large groups and have fun. The list above gives you some of the top party board games for large families or groups. Make sure you try one of them at your next party. 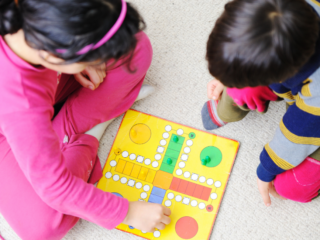 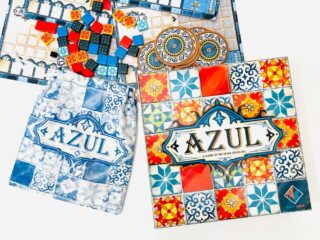 Azul Board Game Rules And How To Play
Read Next Post →