The Haunted Mansion “Call of the Spirits” game is based on the popular Disney Haunted attraction. It’s perfect for your next Halloween board game night!

Get The Disney Haunted Mansion Game

How many players do you need for The Haunted Mansion game?

Disney The Haunted Mansion’s manufacturers are Funko Games. Funko Games say it takes about 30 minutes to play this, but we found that it took around 45, including learning the detailed rules just to play one round.

What is inside the game?

The well-presented box contains one game board which is sectioned into seven haunted rooms with various names, six-player movers that are all shaped like little vampire bats, and a trio of hitchhiking ghosts.

There are 120 Haunt Cards, 99 Ghost Cards, and 14 Event Cards which are used in the game and are decorated with various scary characters.

There are also 6 reference cards that describe the actions a player can make during a turn, one first player marker to give to the first player who goes, and finally two bidding dials which are using by two players in duels.

How do you play The Disney Haunted Mansion Game?

The objective of the game is to collect as many ghost cards and as few haunt cards as possible. Players take it in turns to try to collect cards by moving around the Haunted House one room at a time.

Ghost cards can be collected into sets and are worth different numbers of points. A player may collect a haunt card by encountering the hitchhiking ghosts or for dueling with another player.

A round is complete when all players have taken their turn and a player wins by having the most points in the end and one game will consist of several rounds.

What are the game rules?

The game has two phases; an event phase and an action phase. The rules during the event phase are that the hitchhiking ghosts have to be in one room and there will be as many ghost cards as the number of players plus three. During the action phase, each player takes a turn consisting of up to three out of five actions; moving into an adjacent room, collecting a ghost card, dueling with another player for their ghost card(s), rotating the endless hallway, discarding a haunt card.

If you’ve had to collect haunt cards, it is possible to discard up to one per turn using one of your actions. To do this, it actually takes two actions since you have to first move into the Séance room (which is in the center of the game board) and then once you’re in there, you can finally discard one haunt card.

As said, a player may collect haunt cards during a duel. The other ways they can collect them other than from dueling is if there is specific instruction on a ghost card, or if the player is in the room with the hitchhiking ghosts.

Who Is This Board Game Good For?

This game is great for Disney fans who love Halloween and for people that like a good scare story. It’s also better for older kids and adults since it takes a lot of patience to understand the complicated rules.

Although the manufacturer says it can be played in 30 minutes, I would recommend that people give themselves at least 45 minutes to an hour to figure out how to play, so it would be good to be played on rainy days or during lockdown!

What Are The Fun Benefits Of The Haunted Mansion Game?

This game is good for competitive people especially when you get into duels! There is an element of strategy needed when choosing whether to go into a duel and when selecting a number on your bidding dial.

I really liked that the game is very nicely presented in the box and that the game board and cards are very decorative and spooky. The fact that the cards are made from thick cardstock makes sure that they don’t tear or crease easily. It also gives the whole game a very premium feel. I also like that you don’t need a dice to play the game, so it’s more about the choices you make than the numbers you roll.

What Are Some Ways the Game Could Be Improved?

If there were anything I could improve about Disney’s Haunted Mansion game, it would definitely be a less complicated rulebook, so that you don’t have to spend 20 minutes reading over the rules before starting the actual game. I would also add powerups to some ghost cards to make the game more interesting when playing. This might make people more apt to reach for the game more often and play it.

This game is a fantastic and unique gift for Disney fans though and a great one to set aside for Halloween game night! If you are a fan of Disney check out the Hocus Pocus Board Game! 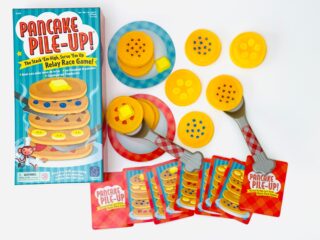 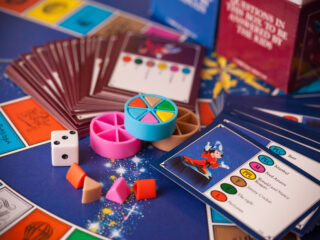