If your kids are fans of the classic and popular Hungry Hippos game by Hasbro Gaming where hippos eat marbles at a breakneck speed, they will love the newest Hungry Hippos Dinos Edition! Just like your favorite hippos, the dinos with the most marbles when time runs out is the winner. Eat marbles by opening and closing your dino mouth at the right time and catch them all!

How many players does Hungry Hippos Dino require?

You can play Hungry Hungry Hippos Dino Edition if you have 2-4 players. The dino version is recommended for children and adults ages 4 (to prevent choking hazards) as it has marbles included.

The amount of time required to play the game is not listed on the game box or directions, but when playing we found that it is very very short and only takes a few minutes per round. You can play Hungry Hungry Hippos if you have 2-4 players.

What is inside the Hungry Hippo Dino board game?

Inside the game box you will find a game base, 4 dinos, 20 marbles, and one marble storage container. The game base is a plastic square with four equal spaces for each of the dinos to fit into.

There are four snapping dinos, each its own color which are purple, lime green, orange, and blue. They all have long necks that open up their mouths and snap forward when you hit the lever on the backs.

The 20 marbles are used as food for the hungry dinosaurs and the marble storage cover connects to the bottom of the game base when storing away the game.

How do you play Hungry Hippo Dino?

Each of the four players sits around the game base where their dino is located. When one person says go, all the players will hit the lever on their dino as fast as they can and once all marbles have been gobbled up, the person with the most marbles in the “stomach” of their dinosaur will be considered the winner. If you want another way to play or have a tie, you can play the bonus round!

What are the game rules?

The rules aren’t actually written in the directions, but there are still some that you have to follow. Some of those include you cannot touch the marbles with your hands, you can’t touch someone else’s dino or take their marbles, and you can’t throw the board if you get angry!

Who would enjoy playing Hungry Hippos?

Hungry Hungry Hippos Dino Edition is great for pretty much anyone with a competitive spirit! Although it’s mainly aimed at younger kids, my parents also had fun with it. Even my dino-loving two-year-old brother loved it before we added the marbles. It is an easy game to transport with the marble storage cover and being able to put the dinos on the bottom so that they don’t take up as much space.

What learning benefit does this game provide?

There is only really one learning benefit to this game. Without the marbles, it is a good way for preschoolers to improve their fine motor skills as they can practice hitting the lever to move the dinosaurs, which is what my brother really enjoyed doing.

How do you clean up the game?

Hungry Hippos Dinos is a fun game that can be played extremely easily and quickly without taking much time to set up or clean up.

I wouldn’t improve anything as it’s a classic, stood the test of time, and my family loves it!

Become a Hero With These Superhero Board Games
← Read Last Post 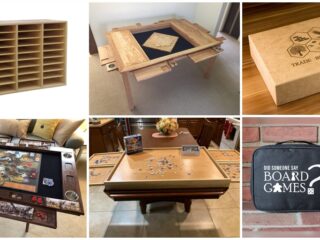 The Best Board Game Storage Solutions
Read Next Post →